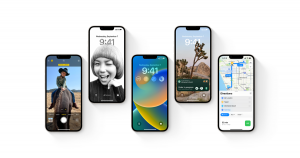 iOS 16 version became available for installation on iPhone in Turkmenistan

The update is available for all devices except models older than iPhone 8.

You can check for its presence by following the path: “Settings” ➟ “General” ➟ “Software Update”. If there is an update, download and install. If not, then it will come later.

iOS 16 introduces more customization options for the lock screen with new fonts, colors, and widgets, an updated notification system, the ability to edit iMessage text after sending it, and other innovations. You can read about all the changes in a separate article.